Okay, so there’s 2 YouTube users that I need to talk about. The first is Paul Broadbent. He had 1 subscriber entitled to his channel, and he is from the UK as far as I know, since he did mention that in one of his video descriptions. He had uploaded 3 videos 8 months prior to the day he uploaded at least 5 more videos with no audio in them. I gave him a piece of my mind by making a comment like this….”There’s no audio in here, so I disliked this video”. I actually ended up giving him more than just give 1 dislike…lets make that 30 dislikes. I simply logged into into many YouTube accounts and gave it a dislike. I then decided to do the same thing on all of his other videos. Once that was all set and done, he had at least 100 dislikes on all of his videos! That took at least an hour to do, just so that you know! I did notice a video entitled “Fox in an urban garden using infra red wildlife cameras”, which also had no audio. I have a feeling that camera doesn’t have a mic on it, and the other videos might be that way too.  I didn’t really have to go that far to give him 100 dislikes, seriously! He ended closing his account before I woke up the next day.

Simon Summers is the 2nd user I will talk about. He is also from the UK and he had at least 16 videos with no audio in them! Yep, almost every video he posted had no audio, with the exception of the first two videos. The first video with audio was making a crackling sound. I suppose that is the reason why he removed the audio. However, the 2nd video sounded perfect. I could hear bird chirping in it. I was so angry about that, I decided to log into multiple YouTube accounts and start posting dislikes on them. All these YouTube accounts had fake names so that Simon would think that lots of people were watching them. I started on a video called “sparrowhawk”. Then I proceeded through the rest of the videos. I didn’t post quite as many dislikes on each video compared to Paul’s videos. I disliked each video between 10 and 15 times. That took long enough for me to do. I used multiple computers with VPN’s. Yes, I actually purchased a software to hide my IP address so that YouTube wouldn’t see through my deviant ways. I even disliked the first two videos that did have audio in them. I just hated this guy THAT much! I went ahead and made a similar comment to what I said to Paul. However, he actually deleted my comment once he read it. So, minutes later after deleting that, I logged into an account the 2nd time and posted the same thing. Then I just SNAPPED! I then posted some comments so extreme that even YOU would close your YouTube account also if you read them. Well, one of them said this, “This video doesn’t belong on YouTube”. Then the very last comment I posted was “Close your YouTube account”. And guess what happened? He did! After being on YouTube for 5 years, it all comes to an end with that comment. This is what appeared when if you typed in the video URL, 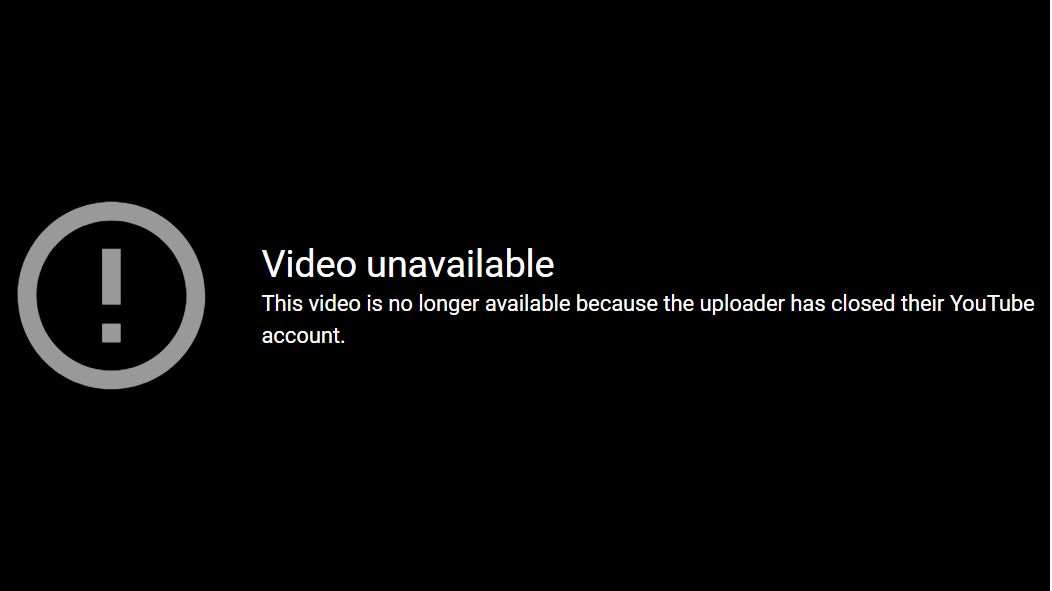 Not like it matters, because this guy had 0 subscribers anyways. However, I did go overboard on Simon. I could have just disliked the video one time and that would be the end of it, but NO! I had to keep going. The comment is what did it.

Unfortuntely, I could not download Simon’s video on time to share it on here. I was literally seconds away from downloading it and it right when Simon closed his account. I did manage to download Paul’s YouTube video of a Sparrowhawk feasting on a pigeon. I actually re-edited the video so that it has music in it, that way I don’t fucking LOSE MY INSANITY! So, here you go, I added a song into the video, called “Treat You Better” by Rufus Du Sol. This song was played on Spin Radio 1071 via their 99.9 HD2 signal with my Visteon HD radio. I really could have treated this guy better. I could have simply asked Paul why he removed the audio from his videos, then he would gladly tell me. If I had gotten a response, then I wouldn’t have gotten as upset as I did. I would simply reply to his comment saying “Thank you” and instead of giving the video dislikes or even 1 dislike, I would give it a “like” instead. Then I would go on my merry way. But I can’t change the past, so I have to live with my mistakes. So, here’s the video, I hope you enjoy it. In addition to adding the music, I also cut out the first and last 4 seconds of the video because there was just a blank screen. He edited this video quite professionally but it boggles my mind why Paul couldn’t just add music in the video. That is all he had to do. Then the video would be perfect! Let me also add that the video quality is one of the best I’ve ever seen! Holy crap the detail of that tasty pigeon the sparrowhawk is eating is so amazing! I could just eat it right now! Seriously! Yes I am that serious! I am going to consider reuploading this video on one of my many YouTube accounts.

Paul and Simon, I do want to say I am soooooo sorry for disliking your videos so many times, and I am ESPECIALLY sorry for the hateful comments that I posted. Please forgive me. I just totally lost my mind, which is typical because I do have autism. I will always remember this event forever and ever! It will continue to haunt me.

How Grateful Am I?

I am majoring in college to be a computer programmer. My favorite food is Buffalo wings. My hobbies include bike riding, listening to the radio, and watching YouTube videos. I used to play piano and guitar. I got my first internet working computer (which is this laptop right here), in November, 2008. I hope to achieve the use of this blog in the best possible way I can. By the way, my favorite animal is the Amazon Parrot and I really want to get one in a few years down the road. Edit: I decided that I'm definitely getting a Raven as a pet. I was going to get a Red Tailed hawk as a falconry bird, but because I don't want to hood my birds (since my mentor will hate me forever for not doing that), I'll be sticking with a Raven. I'll do a sport called Ravenry instead, how's that!